To distribute objects with Blender Geometry Nodes, the “Distribute Points on Faces” node is usually used. It produces a set of points randomly scattered over the surface of the mesh polygons. Next, the necessary objects are located at these points. In common case, these points are located randomly, and the objects located on them can intersect with each other if the points are close. However, we can configure the nodes so that the meshes located on the points will not intersect.

Let’s add a plane to the scene (shift + a – Mesh – Plane), and append a Geometry Nodes modifier for it. By pressing the “New” button, create a new Geometry Nodes node tree. 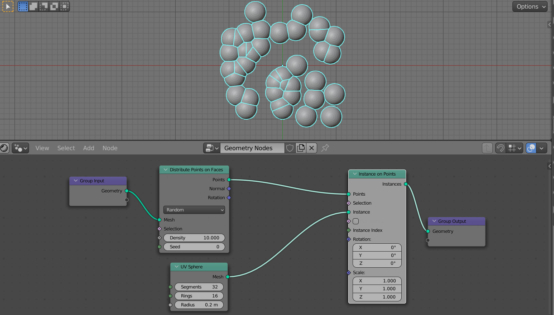 So, the spheres are randomly distributed over the surface of the plane, but they intersect with each other.

To solve the problem of object intersection, the “Distribute Points on Faces” node has a separate “Poisson Disk” mode. When it is enabled, points on the surface are still randomly arranged, but in such a way that the distance between two adjacent points is never less than the value specified in the “Distance Min” node field.

Switch the “Distribute Points on Faces” node to the “Poisson Disk” mode. 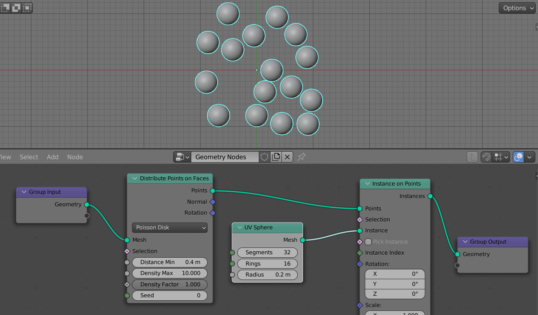 All intersections are eliminated.

For objects more complex than a sphere, the minimum distance without intersections can be obtained, for example, using the “Bounding Box” node or, a bit more precisely, using the “Attribute Statistic” node.

The “Attribute Statistic” node has a “Range” output that returns the largest distance between mesh points – just what we need. 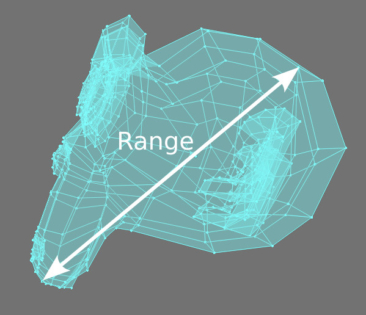 Switch the node to the Vector – Point mode to get values ​​from the “point” attribute of the vector type.

Add a “Position” node (shift+a – Input – Position) and link its “Position” output with the “Attribute” input of the “Attribute Statistic” node to collect statistics from the mesh’s vertices.

The vector obtained from the “Range” output is three-dimensional, but to control the distance between objects on the plane, we need only its projections onto the XY plane.

The value obtained at the output of the Vector Math node is the maximum size of the object in the projection onto the XY plane. Link the node Value output with the Distance Min input of the Distribute Points on Faces node. 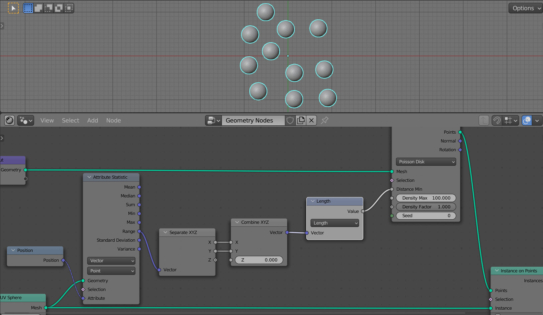 Now this set of nodes can be used with any objects of a more complex shape than a sphere, with no intersections.